I always love this time of the year.  I have so many great memories of how my mother would just open her house to anyone who needed a Thanksgiving meal.  The Lord just blessed her with a heart to share the joy of the season with anyone who might not have a home or family to be with.  Thanksgiving in a foreign country is not the same for sure.  First of all there isn't always the traditional foods available, it is NOT considered a holiday, but we as missionaries have learned to make things from scratch or creatively experiment with things to make it seem like tradition. This Thanksgiving I was so blessed to celebrate it twice.  On Thanksgiving day I spent the day with my mission family here in Kenya and met new missionaries as well.  It was a big feast and full of great fellowship that lasted until late.

That week before Thanksgiving I had been talking with a fellow member of the worship/sound ministry and we were talking about what family traditions or memories we loved.  It was then I talked about Thanksgiving and he (of course as a Kenyan) had never celebrated it and didn't know what it was about.  I explained the best memories I had and why I enjoy going back for furlough at Christmas time.  Well every saturday we have worship practice all day and normally have a small lunch of chapatis and avocados with tea.  Well this last Saturday we celebrated Thanksgiving as family in Christ.  The whole worship team, sound, and a few other brothers joined me as we had a thanksgiving lunch at church.   They tried all the food I brought and to my surprise enjoyed all of it.  It was such a great NEW memory, explaining the holiday and then going around the table and each of us giving thanks to God for what He has done this year.

Hope your Thanksgiving was sweet time with loved ones.  I am so thankful to be a part of God's family, no matter where I am in the world I am always with family and it is such a blessing to be a part of His Agape love and united in His great family.  Happy Thanksgiving!

We give thanks to You, O God, we give thanks! For Your wondrous works declare that Your name is near.  Psalm 75:1 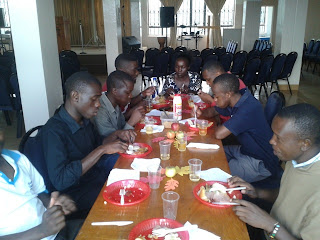 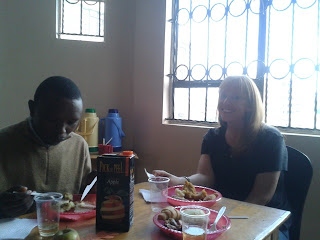 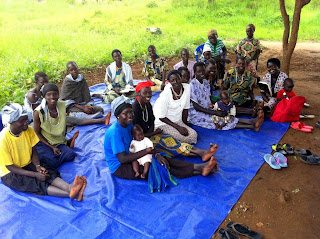 "So many things should have gone wrong

but, miracle of miracles…”

Those were the words I heard over the phone.  The Lord had moved the heart of one woman in Hawaii to help provide a church for the women of Loa. Having little shelter from the elements, it could be a place where they could go to be fed God’s word and worship.  Her act of obedience was to organize a garage sale.

Despite a forecast of thunderstorms, the Lord honored with a beautiful day.  His provision continued.  Free advertising, in the form of signs for two other yard sales in the area, directed people to where their purchases would store up treasures in Heaven.

Her sister told her of an article she read that suggested garage sales typically bring in between a minimum of $100 and a maximum of $1000. She asked, “Lord, a $1,000!”  He honored and showed Himself faithful to exceed.  The final total was $1,001!

In true loaves and fish fashion, there was abundance.  The needy that came to purchase clothes were provided for, and an abundance of extra items were donated to the homeless ministry.  They will, in turn, bless others.

Abba, thank you.  All I need do is hear your voice and follow where your Spirit leads.  Your provision for others is not dependent on me, but I praise your Name that you allow me to be a part of the unfolding of your grace and spreading of your gospel. 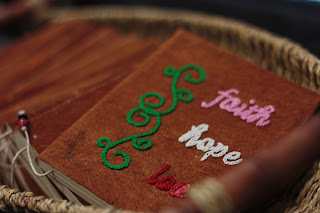 Thank you for your hearts to intercede on behalf of the ministry.  We are so blessed by your participation in what the Lord is doing.  Here are the most recent prayer requests.

CLOSE TO OUR HEARTS

To Africa, and Back, On Less Than a Tank of Gas! 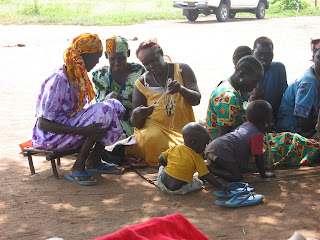 The work of the ladies of Rabuna Fi is available here in Murrieta, California and just in time for Christmas.  For a limited time, we have transformed a portion of our US Headquarters into a boutique filled with craft items from South Sudan, Kenya and Northern Uganda.  The handiwork of the women of Rabuna Fi is reflected in bags and purses, jewelry sets, rings, bookmarks, pashminas, skirts and journals.

Visit Africa in the bold colors and designs of Kitenge fabric purses and bags.  Glimpse a textile tradition from Uganda in our journals that are covered in bark cloth and embellished with embroidery by the ladies of Rabuna Fi. 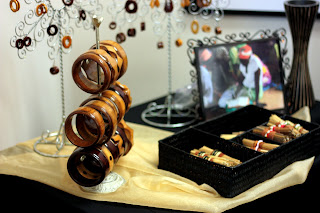 All Uganda is crazy about President Obama and his re-election.

Just after 9:30am Wednesday morning I saw a crowd gathered in downtown Kampala.  They were focused on a television screen watching US President Obama give his victory speech.  The broadcast was live from the BBC, and it was picked up by main Ugandan TV network for all the country to watch.

Obama has a cult-like following in Uganda. I pass by the Obama Car Wash every day.  I've even heard of Obama Cologne being sold here (supposedly it smells like soap).  Later Tuesday afternoon, a colleague took this photo of an Obama supporter's car, complete with letters in red, white, and blue.

I came home Tuesday evening, and my guard asked me the election results.  He was delighted to hear of Obama's victory.

What fascinates me about this cult-like status is that few Ugandans have really know anything about the US President.  What does he stand for?  What are his positions on issues?  They have no idea.

Many Christian are really the same about God.  They really have no idea about God's character or how He feels about things.  They haven't spent any time getting to know Him.

I am currently going through the book of Psalms.  I've found no better look at God's character than what is found there.

Do you know who are you really following?   Spend some time with Him.

Moses and Aaron were among His priests,

And Samuel was among those who called upon His name;

They called upon the LORD, and He answered them.

He spoke to them in the cloudy pillar;

They kept His testimonies and the ordinance He gave them.

You answered them, O LORD our God; You were to them God-Who-Forgives,

Though You took vengeance on their deeds.

Exalt the LORD our God, And worship at His holy hill;