Another Soul Won For Jesus Christ 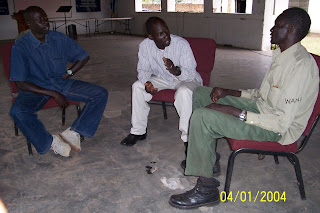 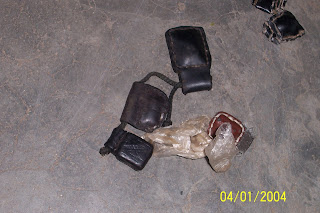 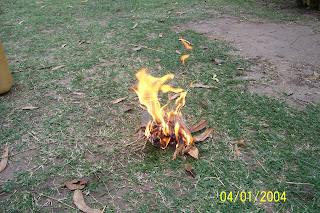 These were the man's charms, he burned them and turned his life around for Jesus Christ.

Posted by Far Reaching Ministries at 16:45 No comments: 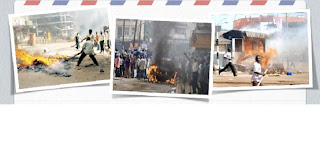 My return to Uganda was punctuated by the most violent riots in recent history. With 24 causalities and over 93 injuries reported, last week's riots surpass the victims of the 2008, 2005 and 1993 protests combined.

The violence started in Kayunga District, 46 miles northeast of Kampala, over the government's refusal to grant the Prime Minister of the Buganda Kingdom access to the district to prepare for the Kings upcoming visit. Historically the land has belonged to the kingdom and those to whom the King has distributed it. More recently, however, in the absence of legal documentation, the land has been 'purchased'. As the road blockade and riots demonstrate, their remains a sharp dispute over ownership. One which isn't likely to be resolved quickly or easily. A friend recently shared her concern with me, "This issue has the potential of returning Uganda to 1985!"

Posted by Far Reaching Ministries at 09:31 No comments:

On Thursday, September 10, riots broke out in Kampala.  The frenzy started over a “king” from a Buganda region (“Buganda” is one of the main tribes in Southern Uganda) of Uganda being denied access to a certain area.  It became a dispute between those in support of King Ronald Muwenda Mutebi of Buganda kingdom and the government under President Museveni.


The riots lasted several days.  Bullets flew and things were looted and burned down.  The police came in with tear gas, and eventually the military were called in to stop the uprising.  A total of 21 people died.  One of those people was a two-year old little boy.  A stray bullet from the streets came into his house and shot him down.


These riots were a reminder of the unstable world we live in- we should only put our stock and our hope in Jesus Christ and the Kingdom He will one day establish when He returns as the Prince of Peace.


Please pray for Kampala, pray for the families of those who have lost their lives, pray again the corruption and tribalism.  Pray most of all for the believers here to reach out to the lost and make the most of every opportunity.

Posted by Far Reaching Ministries at 10:57 No comments: 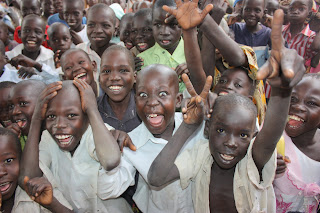 Take our picture, please!
As an American, I have become very accustomed to having my photograph taken. I am ashamed to admit that I shy away from the camera…often times annoyed about not being photogenic enough or just not in a picture taking mood. I have to say that I have changed my view on this issue since my recent trip to Africa. Most, if not all of the children that I had the privilege of meeting in Africa have a much different attitude about photographs. Even the sight of a camera makes their personalities come to life immediately. From shy to ecstatic individuals, they shout and dance at the prospect of having their photograph taken. They are even more amazed at the ability to see their photograph immediately on the screen before them on the digital camera that I held in my hand. Much to my surprise, my camera broke the language barriers that stood between these precious children and me. It was a beautiful sight to see fifty or more kids jumping for joy in unison as they become instant friends. I did not have to speak their language to understand the joy they shared at this simple device that I used to look at as an annoyance. I will also say that many of the kids were shy at first and as soon as they saw the camera, they wanted to be my new friend. At a scheduled stop at the Dura IDP camp to show The Jesus Film (to the kids and adults), I didn’t quite know what to expect There were three Muzungus (white people), three interpreters and hundreds of Africans, but much to my surprise, it was my camera that made these kids come to life. What a blessing it was to see that for a brief moment, these children who have so little and were born in a war torn country, were able put aside the troubles of this world and just be kids! I look forward to the opportunity to visit my new friends in the future and pray that God will use these children to change the future of Africa.

Making the most out of what they have 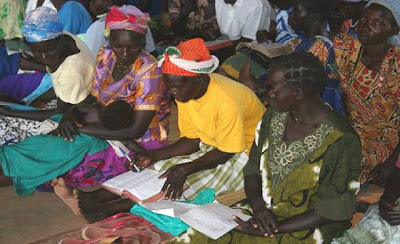 There is a saying in Africa that Christianity is miles wide but only an inch deep. Vicky Bentley was given the vision to not only teach the women and children of Sudan but to disciple them so that they may fully understand the glory of God. She set out hosting bible studies that continued to grow but soon realized the hardship the ladies endured by trying to make it to the bible study. If the ladies spent their time at the study then it would take away from their time to earn money to support their children. Most of the women had husbands that had gone off to the war and were left to fend for themselves and their children. This is how our income generation project was formed. Now the ladies of Rabuna Fi are able to come to the bible studies and earn money to feed their families.
Posted by Far Reaching Ministries at 08:52 No comments: